Help me pick a zigbee repeater

@aaiyar +1 for the Trådfri outlets. Inexpensive, work well, Zigbee 3.0 and work the Xiaomi devices if you decide to play around with those at some point.

I ended up getting four Securifi Peanut plugs and three Ikea Tradfri outlets.

Although my house is odd-shaped, I figure the combination of getting rid of devices known to intermittently drop off a zigbee network, along with the addition of seven devices reputed to function well as zigbee repeaters should make the zigbee mesh robust.

Are you happy with your zigbee mesh now? Would you say that those outlets are helping?

Are you happy with your zigbee mesh now? Would you say that those outlets are helping?

Yes - I'm happy to state that I have no zigbee issues at all. No devices have fallen off. And I would say that the outlets have helped tremendously. From the perspective of appearance, the Tradfi outlets are ugly - so I have I have in spots that are out of sight. The Securifi Peanuts look marginally better.

If you don't have any Xiaomi Zigbee devices, they'd probably all work well.

HI there, from your statement in this thread, can I assume that Xiaomi Zigbee devices dont act as repeaters?

can I assume that Xiaomi Zigbee devices dont act as repeaters?

I'm not sure what I said that would imply that, but Xiaomi devices are (in this respect) like most other Zigbee devices: battery-powered devices are end-devices (not repeaters), and mains-powered devices (there aren't very many of these...) are routers (also called "repeaters"). So the answer depends on your device, but I think the vast majority of people here use mostly the battery-powered sensors, which are not repeaters.

What I was talking about was another issue: most "regular" Zigbee repeaters do not repeat well for Xiaomi devices, which can cause problems with the Xiaomi devices dropping off your network. These issues are well documented in this thread: Xiaomi & Aqara Devices - Pairing & Keeping them connected

Just to clear up confusion that might exist, the IKEA TRÅDFRI are Zigbee 3 and generally decent Zigbee signal repeaters for Zigbee LL devices. They also are compatible with Xiaomi battery devices, which being not fully Zigbee compliant, do not play well with most repeating devices, but the TRÅDFRI and Xiaomi devices seem to “get along”

A critical point of the TRÅDFRI though, is there low cost also results in a signal that is not all that strong. So buy enough to compensate for that. How many depends on a number of factors, but some suggest the 6:1 rule.

I would be interested to hear what people are finding with their Zigbee HA devices and the TRÅDFRI outlets. For me, I only had two Sengled Element Plus bulbs (now replace by me and discontinued by Sengled) that were Zigbee HA. They refused to connect to a TRÅDFRI outlet only 10 feet away after more than two weeks time. What is the experience of others here that can verify with an Xbee? Are your Zigbee HA devices connecting through the Outlet? Or are they bypassing it an instead choosing the hub like my Sengled we’re trying to do (but constantly dropping instead)?

I can't remember, did you ever get an Xbee up and running? The reason I ask is I'm wondering if that Tradfri outlet's child slots are maxed out. I haven't had any issues with the outlets and other zigbee HA devices. Mesh has been solid for a very long time. When I analyze my map, it appears that proximity is the overriding factor in my end devices choice of repeaters. Maybe, those bulbs were just crap. 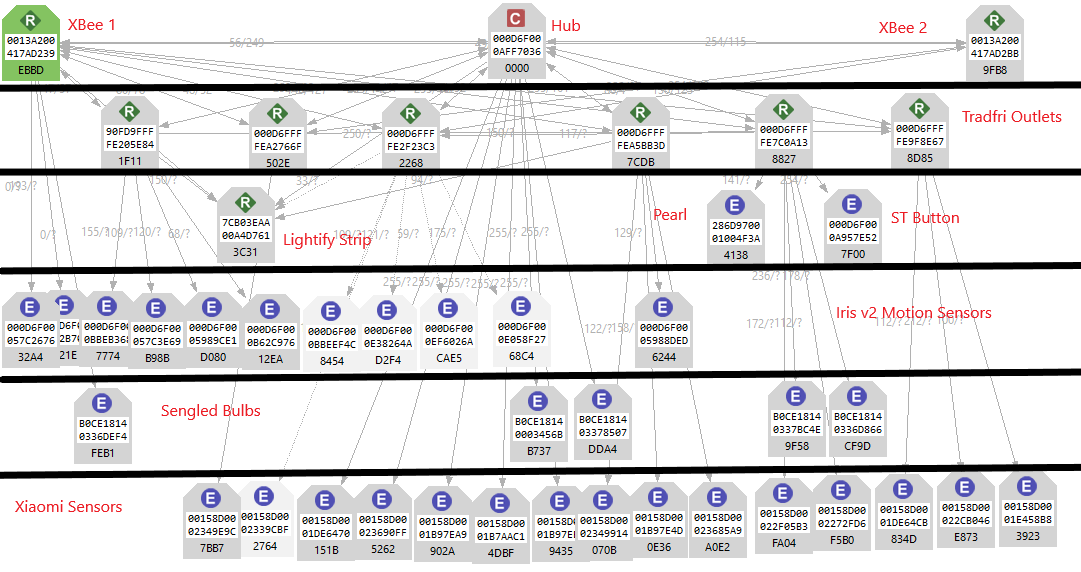 Maybe, those bulbs were just crap.

Yes, I’ve had an Xbee working for a while now. I don’t run mine all the time. Just fire it up when I want to examine the network.

The Ikea outlets may say they are ZigBee 3 but I think they should lose at least a bit because they are big and ugly. Maybe they should only be ZiGbEE 2 3/4.

they are big and ugly. Maybe they should only be ZiGbEE 2 3/4

Could a HUE bridge act as a repeater for xiaomi sensors?

No. Some explanation: a Hue Bridge network supports only Zigbee Light Link (ZLL) or, supposedly, Zigbee 3.0 devices. Xiaomi are more or less Zigbee Home Automation (ZHA) 1.2 devices, a different profile. So you can't get them on the same network. You also can't have one network repeat for a different one, leading to the "no" answer.

More like Zigbee 3.0 devices fail back to ZHA and ZLL so are compatible with Zigbee 3.0. It's the device that's adapting to the bridge, not the other way around.

No, I meant that the Bridge itself had a firmware update recently where the release notes indicated "support for Zigbee 3.0 devices." My "supposedly" comment arose from the fact that, as you note, this should have already worked without any modification on the Bridge (do they mean that they upgraded the Bridge itself to 3.0?) and the fact that I'm not sure there are any 3.0 bulbs to actually test with (certainly not the Osram/Sylvania/Lightify ones that the manufacturer shipped as ZHA 1.2 in the US under the still-yet-to-be-proven-true claim that they wouldn't let us switch to the ZLL firmware like they used to [to let it actually work with Hue] because they were going to standardize on 3.0...).

That's why I'm wondering if it was an actual change or just something that was added for documentation. Know what I mean?

Thanks for the tips!
I have 2 xiaomi contact sensors and 2 vibration sensors which the HE recognise and appears to manage successfully. One of those contact sensors is just out of range. We are very limited in devices that either work or are available in New Zealand. Are there any suggestions to boost my zigbee range to this contact? Otherwise my only option is to go Zwave at 10 times the price. I could procure the Ikea extender from the UK, if that would help.
Any recommendations greatly appreciated

I’m wondering about Xiaomi outlets for our friends in Australia and New Zealand. Do they pair with HE and would they repeat in that scenario?

I could procure the Ikea extender from the UK, if that would help.

It would help tremendously. The little USB repeaters are excellent.