HE compatible thermostat for uk

Are you saying, The Heatmiser hub is NOT required?...This would be a game changer for my plans to have zones stats operating a TRV each via HE

Ah sorry, wishful thinking. The hub is still required to my knowledge

Oh, out of curiosity, which TRV's were you considering using?

Got it, thanks Stuey.
Sometimes I use electric heating, sometimes central heating. I figures neo air stats and passive sensors could control either a TRV or smart plug (with some alexa integration for good measure) I have not selected a TRV yet but have found several Zigbee 3 devices so that is the least of the problems. I do know that cheap temp sensors do not refresh often enough to be useful. Like you, I would prefer everything to be accessible from one hub.

Hi Dave, I assume you're in the UK? Just out of curiosity, can you give me examples of the ZigBee TRV's . I have a few ideas going round in my head

So, I think the standard intro on this thread is... I'm a bit late to this party but...

I've got two separate properties I'm trying to setup with HE. I need to focus on the more complicated one first. I'm sure for some on this forum it's not complicated, but I've found myself very quickly getting to the "I don't know what to do here" stage. I'm wondering if I explain the setup, someone might have a similar enough scenario that they can suggest "do it like this", or encourage me that I'm on the right track, or steer me off the track I'm on.

Large property, it's sort of like a holiday home, but is a place where 8 different partners occasionally stay while doing training. Intermittent/infrequent usage, sometimes busy, sometimes not occupied for weeks, though people pop in and out without staying overnight.

Due to an incident with a lot of unwelcome water, half the property has been redone. This gave us an opportunity to move away from electric-only heating. Not a moment too soon! The setup is now:

3 units with wet UFH
Communal areas with UFH
All UFH is controlled by Heatmiser Neo.

5 units with wet radiators
No thermostat has been fitted to govern this side of it. (!) This was mainly because there was no obvious place to put a thermostat - multiple rooms needing discrete heating. Where does one place it?
Rads now have Moes TRVs, linked to HE, using the Tuya Wall Mounted Thermostat Driver,

courtesy of @kkossev , thank you! It controls the Moes TRVs well, out of the box.
I've also got Zigbee temperature sensors in the various rooms.

There are two gas boilers, one for heating, one for hot water. Two 500 litre high pressure storage tanks.

The current boiler programmer, only just put in by the contractors, is a British Gas DCP programmer. It is literally the worst programmer I've ever used, and is going to be replaced. I think they found it in a bin and thought they'd save a bit of cash.

I'm thinking a sensible route is to put in a couple of Heatmiser Neostat V2 programmers. They will then be controllable by the Heatmiser app, if the whole HE side of thing stops due to me being the only person who can deal with it. And the Heatmiser can be integrated, to an extent, with the HE.

So, the way the building is used is why I think Hubitat could be the best solution.

Firstly, there are 8 partners, all with husbands and wives and children, so there are a lot of potential points of failure if things like turning heating off is to be manual. In the past, it's been common for lights and heating to be left on for weeks unnecessarily.
But people do need to be able to turn heating on, remotely and when at the property.

I'd then have some motion sensors to detect presence and turn things off if not around.

I have tried the built in app Thermostat Controller, but then looked at Thermostat Scheduler as maybe more appropriate. Both of these have a lot of variables and settings that I think aren't relevant, and quickly get complicated. So I've not had a lot of success!

We would want heating to turn off with a lack of presence, but not turn on with presence: sometimes people just come in to get things, for 10 minutes, so we wouldn't want the whole system warming up in that instance. But they'd sometimes to arrive and pick stuff up, then go out for a number of hours but want the heating to go on.

You see? It all gets hard! Does anyone have any guidance here, please?

For reference, these are the TRVs: 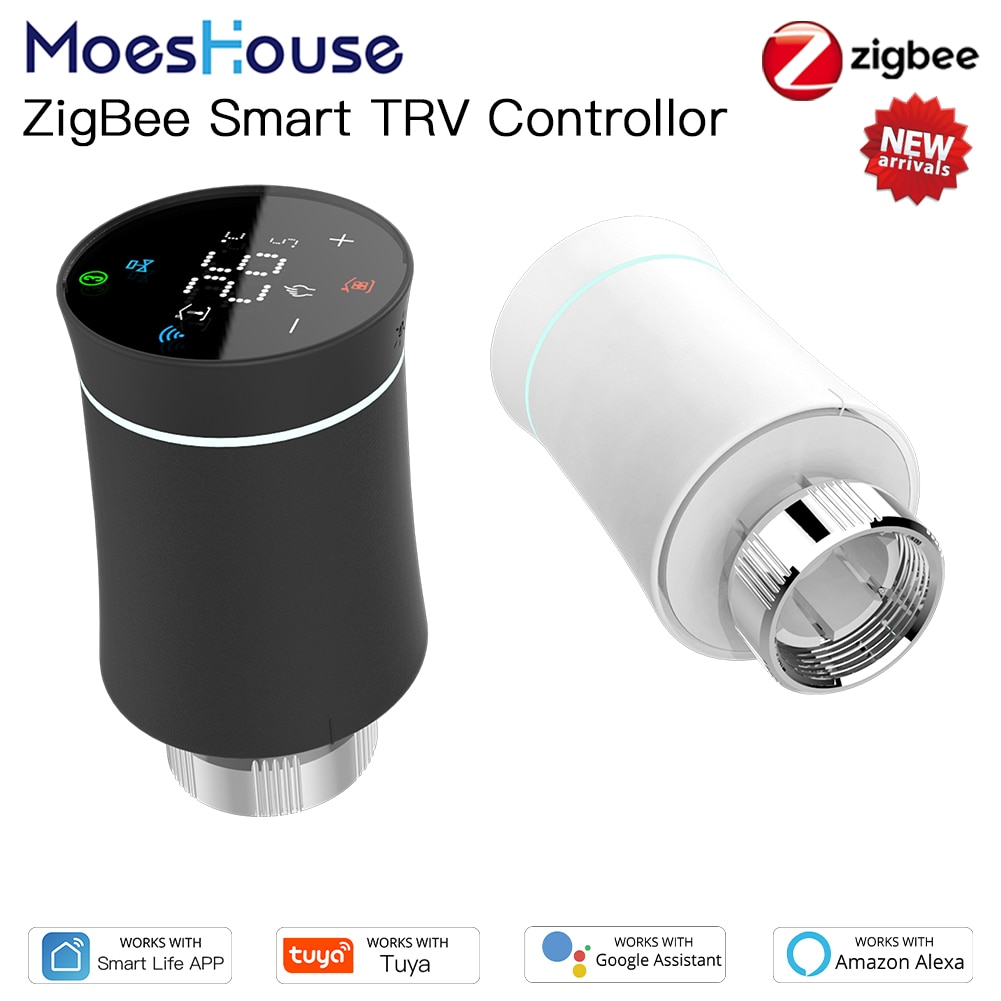 this is what i use for my heating, basicly i have a zigbee relay on the boiler conection where a traditional room thermostat would be, the boiler is set to run all the time the boiler design is when the relay is open the boiler doesn't run. The relay is in a project box with a led push button on to manually toggle on off or can use HE.

Then i have this rule to control the TRV's, the living room (qty 2 TRV) and kitchen temperature setting value is a global variable tile i have on dashboards 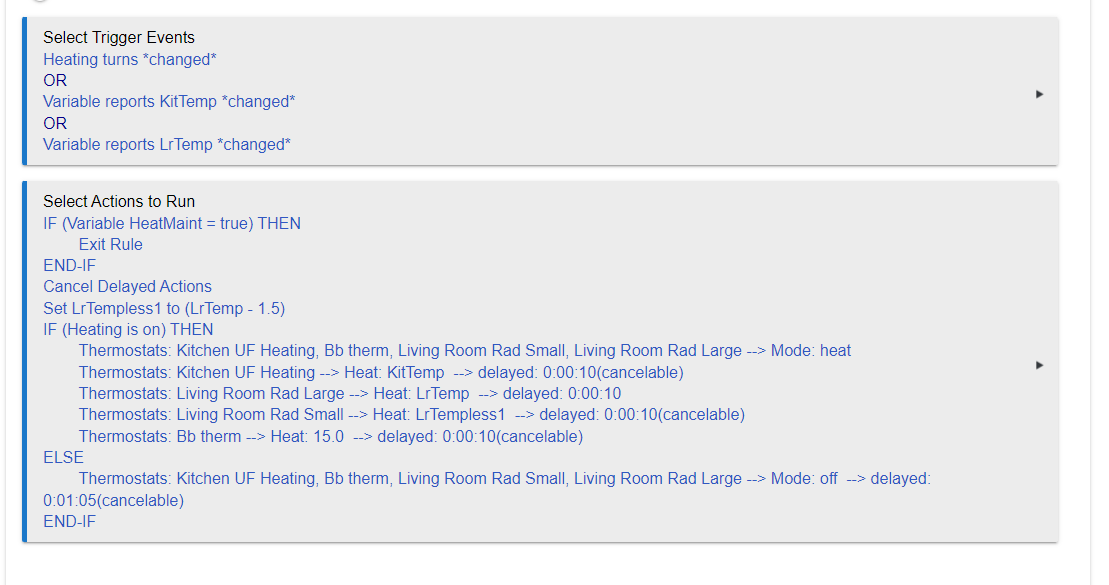 @bagpuss Ive just ordered one of the TRV's and took a leap of faith on it reliability. I need half a dozen of these but thought I'd proof test one initially. How long have you used yours for? Also I have UFH and Heatmiser controls which I Integrate with @cjcharles amazing Heatmiser driver.

My heating is on the usual timers but when mode changes to away, then the heating turns off. Maybe you could set your motion sensors to. IF NO motion for X time, then set mode to "heating off" or something similar.

I have a rule which says, if all motion sensors inactive for 30 mins after 11pm the. Set mode to Night. I assume you could do something similar with your heating

Thank you Mark - I'll have a go at replicating that!

Hi Stuey,
I can't really pass long term judgment on their reliability, as I've not used them for long enough, and I haven't fully got the system set up "properly", so I can't give them a gold seal of approval for not letting me down. That said... while I've been tinkering, they've kind of done what I want, and have continued to work. Fingers crossed.

Thanks for the suggestion on away mode - I've got quite a lot of thinking and programming to do.

Keep tinkering and share the wisdom. I'm far from a HE pro and welcome anyone's knowledge

Hi guys, what a piece of Genius. Just one query if you can help @kkossev could you enable the driver to work with decimal places. It really doesn't like temperatures such as 21.5 or 22.5 etc.

HI @stueyhughes , I will try over the weekend.

Awesome, much appreciated and thanks in advance for your support

Hi @Bagpuss do you have a UK instruction manual for your Moe's TRV's. I can't find one online and I'm getting frustrated.Cheers in adavnce

I just posted this request guys. I guess it ties in with this thread if anyone can help?

Hi guys, I've bought a Moes house TRV as a bit of a trial and it seems to be working well. I've tried to schedule time and temps with the built in HE Thermostat Scheduler and this also seems to work fine. However, if I attempt to override the temperature on the TRV, the temperature revers back to the desired temperature within the Thermostat Scheduler app . Eg, see test scenario attached. The temp changes to 27 degrees at 20:50 in the app. If I override this to 21 degrees on the TRV at 20:55 …

could you enable the driver to work with decimal places. It really doesn't like temperatures such as 21.5 or 22.5 etc.

Unfortunately, BRT-100 Zigbee interface does not allow to set the heatingSetpoint with 0.5 precision. 0.5 resolution can be set only manually from the TRV touch screen controls. I double-checked again today, Zigbee commands allow only integer values to be sent to the device.

Zigbee commands allow only integer values to be sent to the device.

That's very unfortunate. I had a similar issues with my Heatmiser Neostats with @cjcharles driver. However this was resolved upon a request to CJCharles. Whey are WIFI stats rather then ZigBee. Such a shame but thanks for exploring this

Heatmiser is actually ZigBee too, but a super obfuscated weird version of it with a LAN controller that actually does the talking to the thermostats.

All my Trv's have 0.5 settings, send me link to driver