When a Group is already On and it is switched On, members of the Group that were Off turn On. However, a Rule Machine automation that triggers based on the Group turning On does not execute.

I was able to get around this by creating a Virtual Stateless Switch and making it a member of the Group. Then using that switch as a trigger to the rule.

Is there another way to have the Group change itself trigger the rule directly?

Are you turning on the Group using a group Activator (switch)? (I'm not 100% sure whether Groups-2.1 even offers that as an option, since I deleted the "Groups and Scenes" app. I'm basing my question off of this entry in the Docs.)

If so, could the RM rule be modified so it is triggered by that switch turning ON?

NOTE: I'm assuming that you have the Use group device to indicate if any members are off option enabled in the Group, as well.

Yes, I am turning on the Group using the Group device (either through Alexa or in the Group Device itself and clicking On). The Group is set up this way, but I've tried variations to get the rule to trigger: 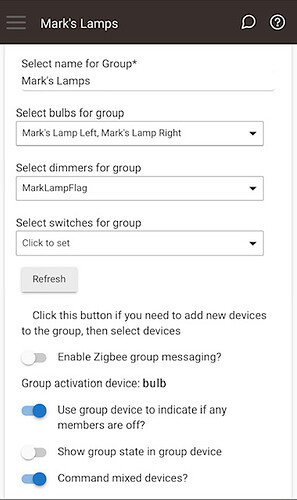 The rule that does not execute is: 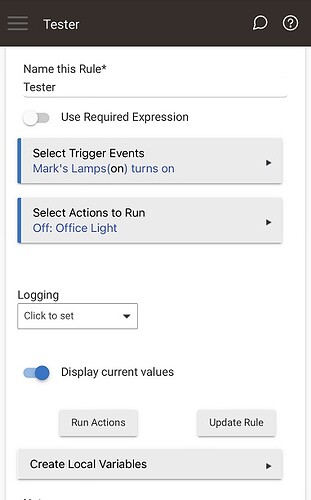 If I change the trigger to MarkLampFlag (a Virtual Stateless Device in the Group), the rule executes

Sounds as though the Activator switch is already "On" so the hub (and consequently RM) is ignoring another "On" command. Thus, I wonder if you might be able to leverage the Group "state" . . . as in (per Docs) "Show group state in group device: adds a "groupState" attribute to the device, which will show a value as one of the following, depending on the state of member devices: allOff, someOn, allOn."

If your Rule's Conditions included (a) Activator switch = On, and (b) groupState = someOn, then that would accurately describe what you seem to be going for. I'm just not sure how you can Trigger the rule under the circumstances. Thoughts?

Sounds as though the Activator switch is already "On" so RM is ignoring another "On" command.

This is incorrect. The hub does not send events that are not state changes. So no event for On gets to RM or any other app from successive events with the same value.

If your Rule's Conditions included (a) Activator switch = On, and (b) groupState = someOn, then that would accurately describe what you seem to be going for. I'm just not sure how you can Trigger the rule under the circumstances. Thoughts?

I tried this. If the Group is On, the Activator Switch is On and the groupState is allOn. Turning the Group On again (via the Group's Device or Alexa) changes nothing. So the rule is not triggered.

My solution of using a Virtual Stateless Switch as a member of the Group does work, so I will just use that