GoControl Thermostat eating batteries an no warning from Hubitat or Watchdog

Anyone with a GoControl thermostat GC-TBZ48L Zwave plus have issues with battery life? I purchased it on Ebay and after 2 weeks, without any warning, I woke up to a freezing house. I heard a clicking and realized it was coming from the thermostat, no temp reading just the backlit screen would come off and on and a clicking. I decided to check the batteries and sure enough, they needed replacing. I replaced the batteries and the thermostat started working again.

I have Device Watchdog installed and yesterday it was still showing 100% and in fact, I had even gone in Devices yesterday and that too showed 100% and throughout the 2 weeks, The device page on Hubitat NOR the thermostat showed anything but 100%. I'm using the driver native to Hubitat and wonder if that does not show a correct depiction of battery usage or was it just a bum thermostat. I also do NOT have a common wire so I can't rely on the electric from my furnace and need to use the batteries. The GoControl website states the batteries should last approximately 2 YEARS.

The previous week I had contacted the Ebay seller to see if he had an extra faceplate because the one sent was really scratched. He was kind enough to send a COMPLETE thermostat not just the faceplate. This time the thermostat had a factory plastic film over the backlight screen so I'm thinking this one was never used and was just an open boxed item.

I just replaced the first thermostat with the 2nd that was sent me and I did a z wave exclusion of the old thermostat. I'll have to wait a few weeks to see if there is any difference. ALSO previously I had a wifi Emerson thermostat which has a safeguard if the batteries died. Does this Gocontrol have any such safeguard?

Anyone have any ideas or any experience with using batteries and the life span they are getting with these thermostats? Much appreciated

I don't run any of mine on battery.

I thought, though, that if you looked in the thermostat menus it would show you if it is in wired or battery mode. It may be worth double checking to ensure it is running in battery mode, because if it is stuck in wired mode for some reason it would burn through the batteries.

I'm not in front of my thermostat, though, so I could be wrong about it showing the power mode (I can look later tonight). I may be thinking of one of the other thermostats I've owned...

Yes, I just ran into this with this exact thermostat. Doing a ZWave exclusion is not enough. You need to do a full factory reset.

The presence or absence of batteries during the FIRST time the thermostat is paired after a RESET will dictate whether it thinks it's a battery powered or hard-wired device.

Remove all the batteries. Press and hold Mode and Fan while putting the batteries in, and release the buttons when you see "reset". Then pair again to your zwave network and you should be good to go.

The presence or absence of batteries during the FIRST time the thermostat is paired after a RESET will dictate whether it thinks it's a battery powered or hard-wired device.

That is 100% true. And is true for most battery operated thermostats as well - not just this one.

Thanks to Jason for explaining, that there are no safeguards with a battery supplied thermostat since no power ( dead batteries) , no power to the relays and also big thanks to bcopeland who gave great advice to use a plugin 24 volt powerpak if no C wire available as alternative to batteries

It is often not difficult to add a C-conductor. Even easier to repurpose the G to be a C. There's also solutions like VenStar's add-a-wire kit.

Thank you for your suggestion about repurposing the G wire for the C wire. Unfortunately that would affect my fan and A/C so have decided to go with an inexpensive 24v powerpak that was recommend by bcopeland. It sells for under $16 on Amazon and i have a plug below my thermostat so I'll just need to fish up the wire from the plug. Again, everyone's help in this matter has been much appreciated. It was truly frightening to wake up a few days ago in a freezing home with my Gocontrol flashing. I've since replaced it with a second one ( I really feel it was defective) and keeping an eye on the battery status till i can attach the powerpak.

What really bothered me was that there was no warning that the batteries had drained. I keep a close eye on all my devices battery status and even use Device Watchdog. Both that app and Hubitats device area for the thermostats battery status always showed 100% leading me to think the thermostat was defective and not reporting correctly.

have decided to go with an inexpensive 24v powerpak that was recommend by bcopeland.

That was a good suggestion from @bcopeland.

I just bought a bunch of these off ebay for cheap to do a per room temperature zone controller...

I also got mine on Ebay. The seller was Alex Sari who is a very reputable seller. The first Gocontrol came without a plastic film on the screen. He does state "used". After I had issues, he sent me a second WITH the plastic covering on the screen so I'm hoping this second one was just an open box item and will work with no issues. Bryan, in your opinion, if the battery status on my first thermostat ALWAYS showed 100% even after the batteries showed weak on a battery test, would you think the thermostat itself was defective or are there are things at play to show battery status? Again MANY THANKS for your idea to use a 24v Powerpak which is arriving today from Amazon.

Also , yesterday I switched to the Enhanced Gocontrol driver and got a Parse error. When I checked the logs NOTHING was filling in, everything was blank and one error that appeared was:

Would you have any ideas? I used the newest driver. The heat function worked fine and under the DEVICE area in Hubitat for the thermostat, under events, everything showed fine - Heat on, off etc, but the log never reported correctly. I reverted back to the default Hubitat driver for the GoControl.

Here is a small piece of the log that appeared:

Also , yesterday I switched to the Enhanced Gocontrol driver and got a Parse error

Just a guess: Did you hit Configure on the device page after switching drivers?

Yes, I made sure to press configure but even after over 20 minutes stiil the same thing. Maybe I'll try it again because on numerous occasions, I've noticed in Hubitat, I had to REPRESS an icon for it to function

@bcopeland would know the answer. I was just throws darts blind. 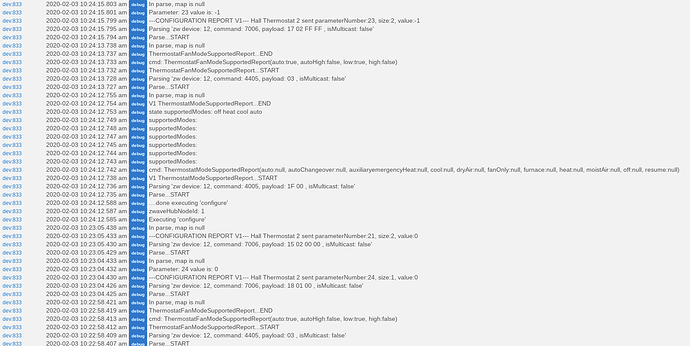 I just deleted new driver and reinstalled, same issue. I thought the first time I used URL to update and maybe there was an issue , so this time cut and pasted and same thing

As a side note this is very typical of Lithium batteries (not inferring you are using them, just stating) to not have accurate battery reporting in devices. My locks all show 100% with Lithium's for months and the minute they start showing less than 100% you better change them as they are completely dead within a day. A couple of my contact sensors show 1% for months yet continue working. Alkaline's 'generally' report accurate overtime degradation.

I was using using Alkaline batteries but GREAT to know about Lithium- THANKS for the info, much appreciated !

I see the problem.. Fixing and pushing an update...

Done.. I issued a pull request to the original... but until he accepts you can grab it from my GitHub:

This file has been truncated. show original
2 Likes
next page →