Yeah, definitely a sensore you never want to go off. Have you had any false alarms?

I know the Utilitech glass break detector (listed as Linear Glass Break Detector and uses Generic Glass Break Detector by Hubitat) works. It is the same thing as the GoControl. I haven't had it detect any glass breaks (no broken glass to detect) but I have set it off when I was using a hammer on a piece of metal inside when it was connected to the Iris system. I haven't tried setting it off while on Hubitat though. I figure it should still work if needed. I have it mounted on the cathedral ceiling in the living room/kitchen area so it can monitor both front and back windows.

Have you had any false alarms?

I installed it in my kids’ room, and they somehow did manage to set it off a few times, I’m still not sure how. Now I have the alerts set to notify me only at night or if we’re not home and haven’t had any false alarms since.

Following. I have two of the Utilitech sensors (same as GoControl I think) and just removed them due to false alarms. Three false alarms in the past few months.

The generic driver was written against a GoControl GB00Z, and I had a heck of time getting It to go off in testing....
A Sonos Play one running a glass break track at full tilt a foot from the sensor finally did the trick...

Is there anything in the driver that can be used to adjust the sensitivity?

No, nothing is adjustable at the device level, so nothing can be done with the driver...

How do these things work? Audio?

Take a 1 gallon zip lock bag, fill it with Legos, and drop it on the floor. It sets off my GE sensors every time.

Maybe mine have lived their life, as they are several years old. Your testing indicates that the sensors in general may not be reliable to go off in a real glass break event though? Curious of your opinion if I should bother replacing them. Thanks

Curious of your opinion if I should bother replacing them

You know I can't answer that...

Ehhh... I wrote a device driver specifically for the Monoprice sensor.

There are a couple of ways to get this device running on Hubitat floating around. The ones I saw had other stuff built into them that this device doesn't support anymore so I made another (hopefully cleaner) version of a krlaframboise driver that had support for another device. This version only has functionality for the Monoprice Shock Detector. The other device the old driver supported could attach an external sensor. The Monorprice Shock Detectors that are sold now definitely do not suppo…

I found the Monoprice sensor to be inexpensive and completely reliable. It's only gigantic flaw is that it is not sensitive enough. Not even close. A fall from height on a hard surface will always trigger it. But it won't pick up vibrations from a washing machine or dryer for example.

Also, Monoprice pisses me off a little with the RBoy partnership. They advertise and sell Z-Wave products with features that are only available behind a pay wall unless you are a developer or can find a driver already written.

They also won't publish reviews or answers that clarify that. That's shady and it rubs me the wrong way.... But I keep buying their contact sensor because it's the cheapest one I've found that supports an external sensor.

Oh I might look into that
My current sensor is way too sensitive and I only want to detect hard jolts.

So, how do these devices (I have the UtiliTech version) work?
Do they work on detecting a glass breakage through the audio signature?
Any pointers on how close to the glass these should be mounted?

I can speak for the Monoprice sensor only. I don't know how the rest work so somebody else can chime in for those. 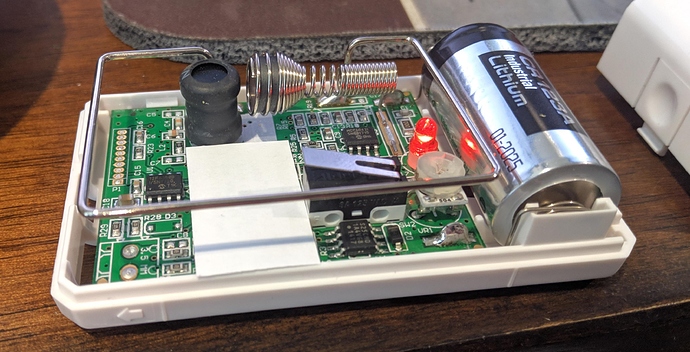 It appears they work using vibration and sensing current created by changes in magnetic fields. The chip in the top right is an amplifier. The magnet moves over that inductor and creates a small analong current that is amplified and then read from the chip on the left (which is a PIC12F635 microcontroller). I couldn't identify the last chip on the bottom.

So, as far as placement goes for the Monoprice sensor you want to put it where it's going to vibrate according to your requirements. If I had to use this to detect glass breaking I might stick it high and in the middle so it was most likely to trigger. I don't use mine for glass breakage.

Hi Mark............ looking to incorporate break glass sensors in HSM. Two things as i am a newbie..... an update if you can on the performance on the gocontrol sensor and can you say if this is activated and a linked siren goes off, can it be silenced by disarming the house?

Thankfully, no one has smashed a window in my home since I last posted in this thread. So all I can say for sure is I haven’t had any false alarms.

If you include the glass break sensor in Hubitat Safety Monitor (it shows up as a contact sensor), then yes you can use this device to trigger an HSM alert, including a siren; if you disarm HSM then your siren should turn off.