Feature request (or maybe how to?)

I have had a couple of occasions where I want to use a tile as an indicator but not to take action - a virtual lock, for instance, that reflects whether all house doors are locked, but I don't actually want to use it to lock or unlock the house. Or perhaps a virtual switch that shows whether something is on or off but can't be changed by the user. I know I can accomplish some of this with an attribute tile but it isn't nearly as visually appealing. Here's an example: 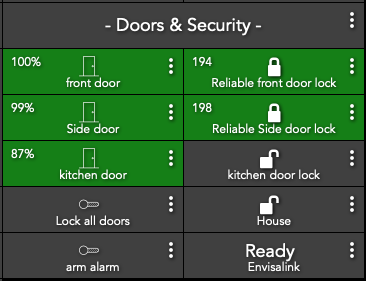 The kitchen door lock is a virtual lock whose state corresponds to the state of the actual lock, but the lock is not electronic (and cannot be retrofitted without replacing the door) and cannot be controlled by HE.

The house virtual lock is simply an amalgamation of the various physical locks. If all of the doors are locked, the house shows as locked. Or in this case since the kitchen door is not locked the house is unlocked as well.

I have some RM magic running so that if one were to attempt to lock the kitchen door from the dashboard it lets you know it cannot be locked manually and it resets to its former position, but it would be convenient just to have a "read only" checkbox on the tile properties and call it a day. (For those who are curious locking the "house" virtual lock will lock the front and side door, but I do not allow all the locks to be unlocked programmatically, so attempting to unlock it generates an error.)

A read-only option on tiles could be useful, especially if someone wants to have a status display dashboard around (ex: wall-mounted tablet) that has some things on it you want anyone to know the status of but do NOT want them to be able to change from there...

Makes sense to me. I also do not know of a way to do this in the dashboard as it is now (if there is a way) so I am also interested if someone comes back with a way to do this.

You could do it via a css hack of setting pointer-events: none on the tile, but that’s about it.

What about stacking a couple tiles? Admittedly I haven’t done this myself and I’m probably glossing over some steps, might also require some css editing to really work right, etc.

But in general you start with the lock tile, then position another dummy tile directly on top of it and set that tile to be transparent.

Then you can see the lock tile and its status but you can’t actually tap on it.

Thanks for the suggestion! I would rather not delve into css if I can avoid it

I think the tile overlay is a good workaround idea. Considering all their work lately to make Hubitat more friendly for new users it a read-only option seems like it would still be the way to go. But at least I learned a workaround also!

Agree re: the utility of a native read-only toggle for certain dashboard tiles.

All props to @TechMedX for the workaround

could look into using something like [RELEASE] Tile Master - Display multiple devices that can be Controlled from the tile! and not linking it via API (doesn't allow control, but can show status). you can then put your own icons for the state to make it more appealing to you.

there is a bit of a curse to Tile Master, but once you get it it's pretty seamless