I got a water sensor with a probe that I mounted in the sump pit just above the theoretical maximum level before the pump should kick in and drain it. This would alert me of a pump failure before it starts flooding the basement. Hopefully it is just a stuck float at that point because otherwise I have no backup plan (yet).

What I want it to do:

Below rule in HSM failed horribly:
I think (1) is how long sensor must be active before alerting? So set to 0
I think maybe (2) is a threshold so you don't get constant alerts if the sensor is flip flopping
I mounted the sensor a little too low I think, and it activated at 3 AM last night, Did not get any alerts, and it did not repeat (sort of glad since it was a false alarm).

I don't think there is any way to do what I want as a custom HSM rule which is disappointing since it can be done easily with the water alarm section (I am using that for actual leak sensors). I dont think I am trying to do anything crazy here, seems like it should be easy but it is not

.
Debating if I should go to the notifier app, or a custom Rule in RM. Making rules in RM are upsetting, So. Much. Clicking. frustrates me to no end. 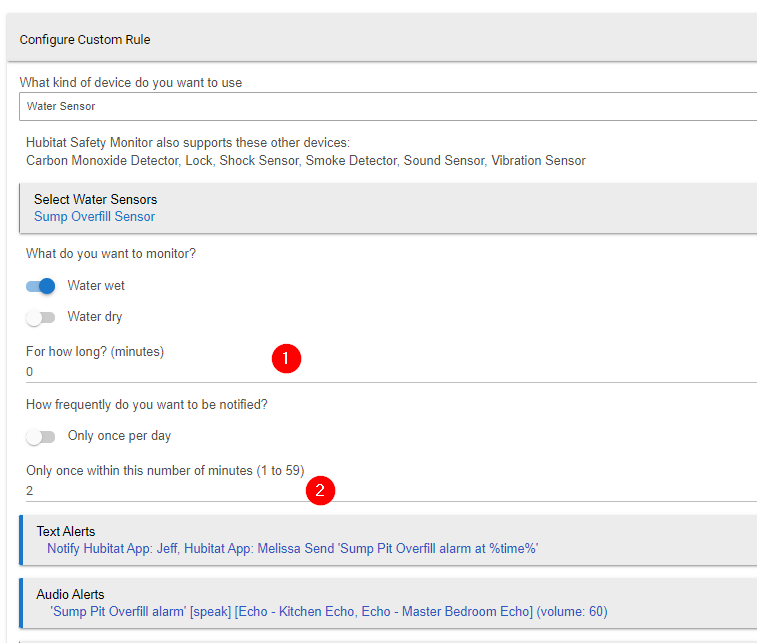 I would just do it in RM. Attach probe at proper height, triggered >> start pump>> run for x minutes, ensure dry (changed) probe, turn off sump. Rinse and repeat. Throw a repeater near by just to make sure it always has a route.

Not a hubitat user so honestly not sure this is responsive.

But this video seems to illustrate at least some of what you're trying to do except with Google home + relay instead of an echo + water sensor.

Posting in case it is helpful. 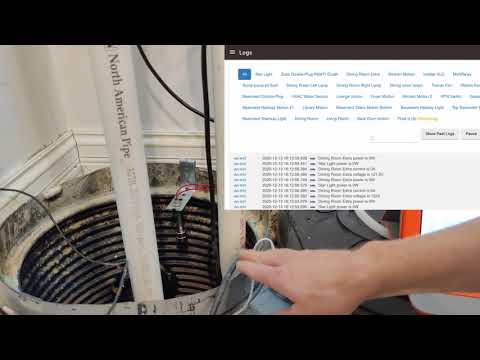 I would just do it in RM.

I would just keep pushing in HSM if only for the reasons he gave. HSM SHOULD BE UP TO THIS...it's not a rocket science use case and the hand holding in HSM should be there to accomplish this basic of tasks.

Making rules in RM are upsetting, So. Much. Clicking. frustrates me to no end.

Couple of comments to OP on the settings...
I WOULD set that "For how long?" to 1 just so you are triggering on a clear failure of the pump not a momentary glitch or splash.
I WOULDN'T set the "Only once within this number of minutes" to such a low number, why would you need to be advised of this any more frequently than once every 30 minutes?
I WOULDN'T depend totally on means of notifications that rely on more complicated layers to always work....put a flashing light in there somewhere.

As for why this isn't working...I'm betting it is some simple thing that can be sussed out, hang in there, lift the lid on the logs, do some real time testing to make sure everything including that sensor behaves as expected, the problem should reveal itself.

Not everything that people think should be in HSM are suitable for HSM.... HSM is very basic. Anything more than that should be done in RM. I used to be that way about certain things until it was pointed out to me that constantly adding complexity to simple programs like HSM or Simple automation rules essentially makes it into RM... Not every use case fits program... Just sayin.

Not every use case fits program... Just sayin.

OK, I hear and appreciate that. And I'll raise this point of question then... HOW DOES ONE KNOW coming into HE? (I wasn't yelling that, just emphasizing). I mean how many rabbit holes does a new user go down before they go, "ah...crap...guess I gotta get into RM"

We better not get into this too deep here or we'll get shut down. But my point is, while many folks could think of lots of niceties that could be added to his functional requirement by going down the RM path, I'm just not seeing that this, at it's basic level, is NOT what HSM was meant for when a Newbee walks in the HE door.

And maybe....some extra clarification should be attached to HSM to prevent people from spending time there when it's not appropriate.

Addendum for clarification: He isn't running the sump via HE, that's always the role of an analogue float switch. The HE involvement is simply a pump failure monitoring mechanism.

Addendum for clarification: He isn't running the sump via HE, that's always the role of an analogue float switch. The HE involvement is simply a pump failure monitoring mechanism.

Yes, he gets what I am trying to do. No way am I going to rely on wireless anything to activate the pump. Just want an alarm if the tank is getting too high. All spring this is my fear when the pump runs 3-4 times a day for weeks. I am going down to check once a day to make sure the basement is not flooding. Peace of mind is all I want. I may add an energy monitor plug as well just so I can track when it runs.

Also, I am not really asking for more features in HSM that are not already present. I just want the "Custom Rule" to have the same options as the water leak alarm section. Or to be able to make a second water leak alarm. Not all water "leaks" warrant shutting off the water main.

This right here for text and audio alerts. 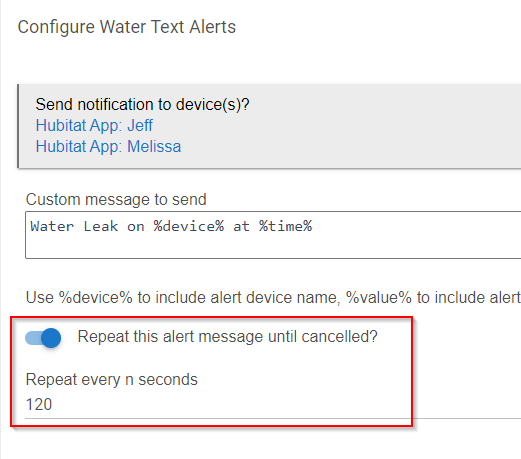 I WOULD set that "For how long?" to 1 just so you are triggering on a clear failure of the pump not a momentary glitch or splash.
I WOULDN'T set the "Only once within this number of minutes" to such a low number, why would you need to be advised of this any more frequently than once every 30 minutes?

I might have to do the 1 minute for now. I wish it was more granular. 1 whole minute seems like a long time when your basement is potentially about the start flooding, 30 seconds would make me happy. And I do want it to annoy me constantly until I fix the problem. I was hoping it would repeat every 2 minutes but not sure if that's what it does or not. After it triggered at 3AM it said "Alert" in HSM but the alerts were not repeating. This was even after the sensor was stuck in a "wet" state all night (not sure why, possibly water trapped behind the sensor). So I think the "only once every x minutes" would prevent it from alerting non-stop only if the sensor was cycling between wet and dry, it would only alert me every 2 minutes. But if it stays wet it would alert once and then stop, which honestly is nearly useless.

All spring this is my fear when the pump runs 3-4 times a day for weeks. I am going down to check once a day to make sure the basement is not flooding. Peace of mind is all I want.

Monitoring systems aside....having grown up where sumps "were a thing" I can appreciate the fear. One thing I never thought about was some smaller inexpensive auxiliary pump to back up the primary just in case. This might seem like overkill, but if you are really worried and have a pervasive influx of water in Spring it might be something to consider. I have gotten a lot of utility out of affordable Rule pumps in pond applications (something they weren't intended for). Here's a 110V one that may squeeze into the pit with your standard pump. 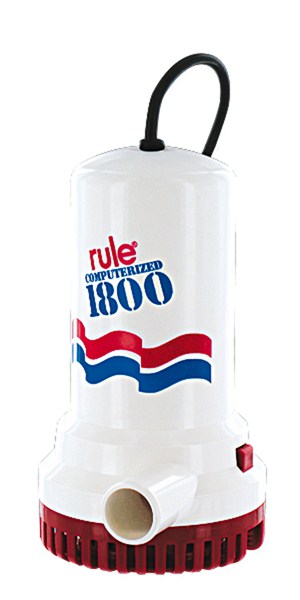 I think this would do you, I simply used my sensors in place and alter timing as needed...
You can create a virtual switch to cancel the alert and exit the alarm.. This can also be tied to a button controller. (I do something similar for leaving my exterior doors open) 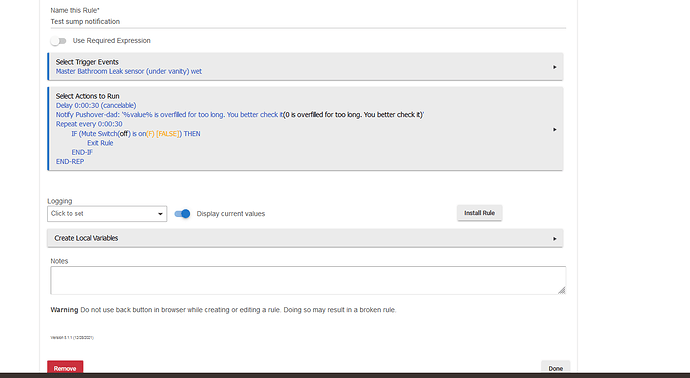 One thing I never thought about was some smaller inexpensive auxiliary pump to back up the primary just in case.

Yeah I actually bought a utility pump to drain the pool faster this fall, you reminded me I want to put it in the basement by the pit so I can quickly get it in there and hooked up to dump the water down the drain in am emergency. Yes I know you are not allowed to pump this water into the sewer drain but its going to go in there anyway if the pit overflows!

There is probably some fancy way I could tap it into the line that goes outside as well but the probability of total pump failure is low, I am actually more worried about the float getting stuck or malfunctioning.

@rlithgow1 thanks for the example. I will probably go that route eventually.

i do this in HSM. Put it a little above and let it sent me a pushover message. I turned off the siren alarm at the new house to make sure i dont get false positives for any water but that should go on soon

I installed a Wayne battery backup sump pump (with separate float and discharge), and my main sump pump is connected to an automatic transfer switch that switches from utility electricity to an inverter that is powered from a 12v battery.

I use an Aeotec ZW100 MulitSensor 6 for water and temp issues. I test periodically and the water sensor always works.

I also test for electricity status in the house.

A zwave open/close sensor connected to a float would provide redundancy.