The instructions for the Device Firmware Updater, found here:
https://docs2.hubitat.com/en/apps/device-firmware-updater
need more direction in the first section, after the 2nd step.

After the second step, there is a screen where the user needs to select either "Firmware File Manager" or "Update Z-Wave Firmware"

I'm guessing I need to first select Firmware File Manager?
Also, does this Device Firmware Update link at all with what I think might be the Updated Firmware HPM is telling it downloads?

Yes, there must have been screenshots from an older version of the file management piece in here. You do want to select Firmware File Manager to get to that screen, as you guessed, which was also missing (and fixed now -- thanks!).

ETA: I think I answered my own question.
Firmware updater is software for the device itself.
HPM updates drivers for the HE

Seems like you mostly got it figured out: HPM can help you update drivers, apps, or libraries on Hubitat but not device firmware. Device Firmware Updater is indeed an app; the older firmware update driver is, well, a driver -- both different approaches to the same goal (with the new app eliminating the hassle of switching drivers or getting a URL the hub can reach to download from).

Thanks.
So once HPM tells you it has updated drivers for the Inovelli switch, how do you get those drivers installed?

This is a function also inside HPM. The "Update" button/link on the main page of the HPM app will take you to a page that will let you see what updates are available (according to what HPM knows about what you have) and select any apps, drivers, or libraries that you want to update.

Yes, that is how I saw there was an update for Inovelli. I checked the box in HPM/Updates. Presumably it downloaded to somewhere. Is that all there is to it or do I have to do something else?
ETA: and is there somewhere I can check to know which one I'm using?
ETA 2: In HE, if I click on the section named "Drivers code" there are two entries for Inovelli Dimmer Red Series LZW31-SN. One states it was last modified in June 2022, the other states it was last modified in December 2022. However, when I open both of them, the latest entry at the top is 5/4/22.
a. Does this mean they are both the same version?
b. Is it the newest version?
c. Can I delete one of them or do I need two entries because I have two Inovelli switches installed (although that also makes no sense because until yesterday I only had one installed and this says it installed the 2nd instance of the driver in December of 2022....)

After you go through the "Update" page and make your selections, you should see progress notes appear on the screen — e.g., downloading XYZ app, installing XYZ driver, etc. and something like "The packages were updated successfully" at the end if all went well, or some errors if it didn't. There's usually nothing else you need to do, though it's good to read the release notes for your apps and drivers (HPM offers authors the ability to show these in HPM before updates, and many do) in case the author has any requirements for the upgrade or special notes for you to consider — though this isn't an HPM issue per se.

ETA 2: In HE, if I click on the section named "Drivers code" there are two entries for Inovelli Dimmer Red Series LZW31-SN. One states it was last modified in June 2022, the other states it was last modified in December 2022. However, when I open both of them, the latest entry at the top is 5/4/22.
a. Does this mean they are both the same version?
b. Is it the newest version?
c. Can I delete one of them or do I need two entries because I have two Inovelli switches installed (although that also makes no sense because until yesterday I only had one installed and this says it installed the 2nd instance of the driver in December of 2022....)

So, it seems you installed this twice -- possibly once yourself and once via HPM. As long as all your devices are only using one driver, you can delete one. Hubitat will give you an error and not let you delete one if you are actually using it, so you'll at least know what went wrong. If the one you aren't using (and delete) happens to be the one HPM was managing, you'll probably have to do a match-up in HPM to get it to see the right one.

If you're using both, you'll have to switch all your devices to one. This may be hard since they both have the same name and it will be hard to tell from the device detail page/driver dropdown, but it's likely the order (first or second) will be consistent among all places. Or, this will probably be easier if you edit the code for one driver and change the line with name: it to something a little different so it's more apparent, then make sure all your devices are using the other.

The "modified" date you see in the Drivers Code list is just the last time the code was saved on the hub, not necessarily the last time the author actually changed anything. Looking inside the code yourself to see (developers often include a changelog towards the top) is one way to actually tell.

I really appreciate your help. ALOT.

So I went to the Drivers Code page and tried to delete the one further up on the list (Installed Dec 2022) and it gives me a warning that both Inovelli switches are using this. So I deleted the one installed June 2022. That went fine.

Then I went to App/ HPM and had it check for updates. Screen flashed too quick to see if Inovelli was included. So I went the HPM "View Apps and Drivers" section. It lists: Inovelli Dimmer Red Series LZW31-SN v22 5.4 (driver).
It also has a hyperlink to click for "Documentation" so I hoped I could go there to see if I have the newest driver. No luck - that link takes me to something about SmartThings Device Handlers that I totally don't understand.

ETA: I also clicked in HPM/Match Installed Apps and Drivers, and clicked next. It said "Match up Complete. No matching packages were found. " I presume this is because they were all already matched.

So is the version of Inovelli Red Dimmer driver my HE has v22 5.4?
Was that also last updated 5/4/22?
How would a person figure this out on the Inovelli site?

I think the easiest thing to do would be to leave HPM out of the picture for a minute and compare your driver to the latest code available directly from Inovelli. For Hubitat, they would all be here:

Location for Inovelli Hubitat Drivers and Apps. Contribute to InovelliUSA/Hubitat development by creating an account on GitHub.

Thank you. From that (although it is a bit difficult to figure out) I deduce that the last time LZW31-SN was updated was 9 months ago on 5/4/22.
That matches the latest update date at the top when I go to Drivers Code and open the Inovelli Dimmer Red Series LZW31-SN file.
Based on this, I think I have the latest HE driver.

I will now try once more to update the firmware for the switch, using the HE App "Device Firmware Updater" and the files I downloaded from Inovelli. This did not work the first time around.

That's good on the driver side!

The driver is unlikely to have much of an effect on the firmware update (certainly not if you're using the driver-based updater; if you're using the app, the only thing I can think of is regarding sleepy devices, which isn't applicable to any Inovelli device except their discontinued multisensor). So, if you're having problems with that, it's likely something else, and you can get better help if you mention what the problem is -- if you end up having one again. Good luck, and hopefully you don't have one!

Then I power cycled the device by turning off the breaker, waiting 10 seconds and turning it back on.

Then I go to devices and the Inovelli switch I updated, but on the right side under "Current States" it still shows: 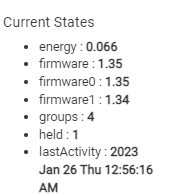 Also, I checked the Current States before power cycling as well, right after the supposed firmware update. Last Activity showed about the exact time the firmware should have updated, so something communicates with the switch, but the firmware never shows as updated...

Then I go to devices and the Inovelli switch I updated, but on the right side under "Current States" it still shows: 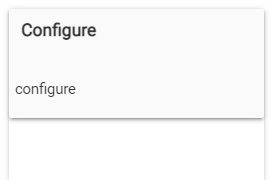 YES!! Clicking "Configure" did it!
THANK YOU!