Does a custom device handler exist for generic outlets and ge switches that adds a command to the device page to turn it on or off by typing "on" or "off" then clicking the button so it can also be used in RM as a custom action actuator?

Is there a reason you want to use the device in that way? It may be worth providing some more background on what you are trying to achieve. You can call the on / off commands as custom actions.

Simply for the sake of simplicity and cleaner shorter rules.

Which one looks better? ("configure" was used for the example. this is where the ability to "switch" it would be) 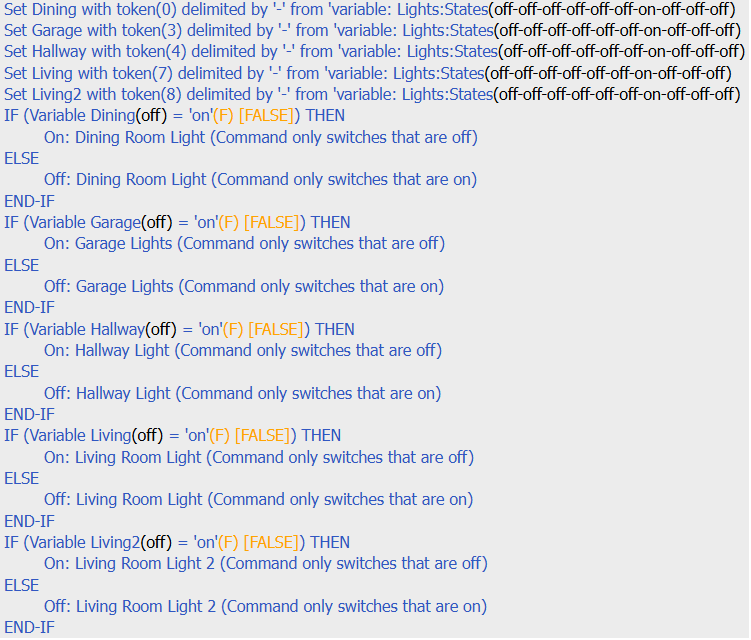 Capture and restore does not work with many devices. Tried it and moved on.

I know I could loose the Else statements by turning all on or off, depending on the rule, then checking the variables, but I don't want them to change states before doing so especially if they were already on before the rule ran.

I'm not quite sure I get what you are trying to achieve with the variable.... Is that representing motion of some kind?

It represents the state the device was in before the rule changed it, if needed.

Hmmm... I get what you are trying to do now.... There is an option in Room Lighting for something like this, but I'm not sure whether it will suit all circumstances...

If you want a slightly cleaner looking RM rule you could use the Simple Conditional option instead.

Thanks, that gives me an idea for a workaround.