That's not a community supported device but a built-in device.

I updated the supported devices wiki, now it just needs to be approved by Hubitat for it to post. Thanks!

Yesterday I added Wink Siren and Chime and Honeywell Z-Wave Thermostat (TH8320ZW) to the list above. I hope I did it right, do I need to add more info? Anything else I can add to be useful?

Also Kwikset 888 5-button deadbolt Generic Z-Wave lock. Documentation makes it sound like you can also set it up as Zigbee.

I know they are Linear underneath, which is shown in the main compatibility list, but I thought it might be worth mentioning them by the name I bought them as which was GoControl.

LED Controllers All RGBgenie Z-Wave Plus LED controllers work through the Zwave-LED-Controller.groovy driver The LED controller driver allows you to change the type of device so you are not limited by the original model purchase. You can adjust between CCT, Single Color, and RGBW models, and it will change the device's functionality at a firmware level. RGBW Models: You can optionally enable / disable the WarmWhite component so if you are using RGB only LED strips you won't get signals sent t…

Added Ecowitt GW1000. A low cost weather sensor internet gateway which can be used directly via LAN only with HE.

Added the Abode driver now that it's GA/Stable. Added links to the Ecobee and IFTTT mentions because they looked lonely

@mike.maxwell I recently added a few Sylvania smart+ flex rgbw lightstrips. They paired as generic zigbee bulbs, so I changed the driver to rgbw bulb and they’re working fine.

On the compatible list so maybe the footprint changed? Details during pairing pasted below. Thanks.

Was a driver ever produced for the ubino RGBW controller?

@philippe.charette, yuou should add yoru stelpro stuff to this list.

They've been working great for me so far!

Also, it works as a repeater in case anyone is interested.

I added my Trane Z-Wave Thermostats (TZEMT400BB32MAA) to my HE config. They're regular Z-Wave, not Z-Wave Plus, but they registered just fine in-location.

I ran these for a few yrs prior to the Nests they now replace, and they're solid (require C-Wire)

In HE, they work fine with the Generic Z-Wave Thermostat driver, so their details need to be attached for automatic driver selection.

They're this Z-Wave device in Chris's catalog:

he also includes links to the Doc for the device:

I'd like to put in a request for a generic zigbee temperature/humidity sensor.

Konke, Aqara, Tuya, AduraSmart and others make such a device, and I believe that others are coming.

I am currently using for this purpose a community developed Konke driver, but I'd like to use a built in driver.

You might want to post this under the feature request forum. It's unlikely to be noticed much here under the documentation wiki...

I would like to report that I have tried some Zigbee sensors that aren't officially in the list of Supported Devices but they work great. The device is the Ecolink model 4655BC0-R Zigbee Wireless Door/Window Sensors. They are auto-detected by HE using the Zigbee device pairing function. HE detects them as "Generic Zigbee Motion Sensor" but I manually changed the device type from the dropdown to be a "Generic Zigbee Contact Sensor" and they are working great.

I am using these to trigger lights on/off on interior doors in conjunction with Tasmota WiFi wall switches and it's working well for this. The delay after opening a door is about a half second to a second, which is acceptable for me.

These also report temperature if that is important for you. I am not using this functionality as of yet but I might find a way to use it later. I do have an interest in monitoring my HVAC performance but I have higher priority integrations to tackle first.

No way of knowing what the battery life is yet as I've only had them 4 days. But for an as-delivered price of about $5.30 per unit, it's worth it to me taking a chance on the battery life.

What battery do they take?

CR2450 0.5A is what the label says. I haven't taken any of them apart as there doesn't appear to be an easy way to do so without causing at least a little physical damage. The battery comes installed with a pull tab to keep it from making contact.

[Edit] Well never mind it wasn't too bad to pull it apart with some thumb power. Panasonic CR2450. 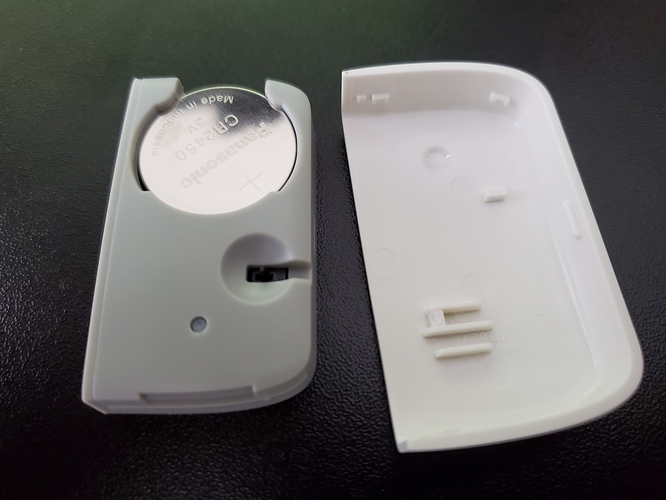 Those look very nice. I do like the longevity of the CR2 batteries in my Iris sensors though.