Unable to set Dimmer down when starting Dashboard?
See photo. It is set to UP when change to Down and Save Preference changes back to UP 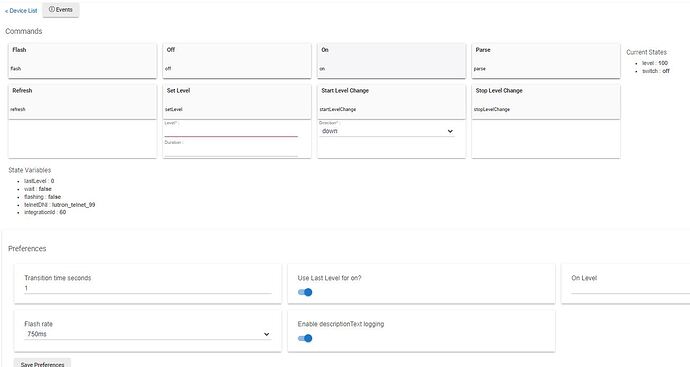 From the Hubitat Dashboard, you should simply use the tile designed for a dimmer, as it has a slider to adjust the brightness level of the dimmer switch. There is no reason to use StartLevelChange() and StopLevelChange() from the Dashboard, that I can think of…

Device preferences are located in the preferences section, these are applied when the save preferences button is clicked.
The commands section contains all of a devices available commands and can be used for device testing ect. Any parameter options for commands, such as those available for startLevelChange are not saved as they aren't device preferences and are simply available as an aid for testing devices manually.

Thanks ogiewon. But when first opening dashboard always has dimmer slider full on even if dimmer was off?
Yes, Mike was right NOB here I was trying to use the command section to have down when open dashboard. ops

So in preferences section if I turn off "Use last level off" Dashboard open and close follows last dimmer setting status including slider location on dashboard ok.

If someone uses the Lutron app the dashboard tile color change on/off. But the slider stays full on in dashboard when Lutron app turns dimmer off, and then stays there when open dashboard and tile is dark since the dimmer was turn off via lutron app?

Thanks for help you guys!

Update: Is anyone else having my problem? Turns out it is the Dashboard Dimmer Slider! only follows accurately the Lutron App when opening and closing the HE dashboard? Kinda looks like the same problem the Rachio 3 status has? I have completly removed and reinstalled the HE Lutron app and acts the same.

yes, and this is how our integration works.

The dashboard slider always goes completely to the right (on) while tile is dark and light is off.

when this happens, what is the level value as displayed in the device current states in the dimmers details in Hubitat? 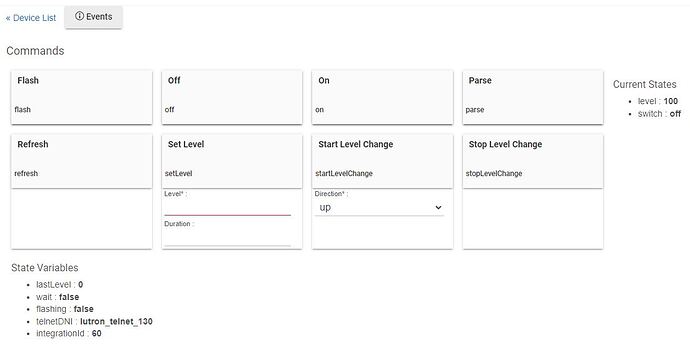 Mike another question about Lutron Caseta. I modified my Crestron program to allow 75IDs not 60IDs a was original. Does the HE Lutron app allow the full 75IDs that Caseta now allows? I have 72 in one of my implementations I would like to use HE on.

Is there a way to change the title of this Help? Its really a slider bug for me not a start Level change?

Hubitat doesn't have a device limit for Caseta or RadioRA2, device limits are driven by Lutron, not Hubitat.

Right, this is correct. A level value of 0 makes no sense when you have an explicit attribute that dictates the actual device power state.
In cases where a setLevel command with a value of 0 is sent to a device, 0 is treated as off and the previous level is retained...

There are dimmers and bulbs out there that will report a switch value of on with a level value of 0, which is obviously problematic.

Hum would have thought a level of zero would have been required to show off?
Do I have something programed wrong here?
The only way I get the Dashboard slider to zero is to use the Lutron app slider.
Thanks for your help!

You don't have anything wrong.

As Mike pointed out, Hubitat's 'switch' state is separate from its 'level' state. Hubitat has made the programming choice to keep 'level' (which is used for the dashboard slider) at the value immediately preceding a switch 'off' event. Setting the level of the dimmer to 0 is functionally the same as a switch 'off' event and keeps the 'level' at the value preceding setting the level to 0.

Could they program it differently? I guess so. If I were programming the dashboard tile I'd do it similar to how it is now, but I'd put the level slider at the value it will take on when turned on. That value is settable as described in the next paragraph.

One nice thing that Hubitat does that the Lutron app cannot is to make the 'on' level programmable. In Hubitat you can program the level to previous setting or a fixed level. In Lutron the level is fixed to 100%. For Caséta that's not a big deal as Caséta hardware comes on at 100% only. If you have RadioRA 2 then the 100% for 'on' does not match with what the hardware does. The hardware is programmable in the same manner as Hubitat's driver.

You guys are great! thanks for that understanding.
My setting is "Use last level on" I was just grousing about the slider being in the wrong position IE> full on when dashboard is opened. Somehow the Lutron apps slider keeps up with the ON/OFF or level as set by a Lutron dimmer. I will get along with the way it is ok.