@bravenel Bruce, I think I may have found a bug in RM where it doesn't cleanly remove a music or speech device when the action involving the device is removed from the rule. Consider the following rule (the first "Speak on" action is using a music device, the second one is using a speech device.): 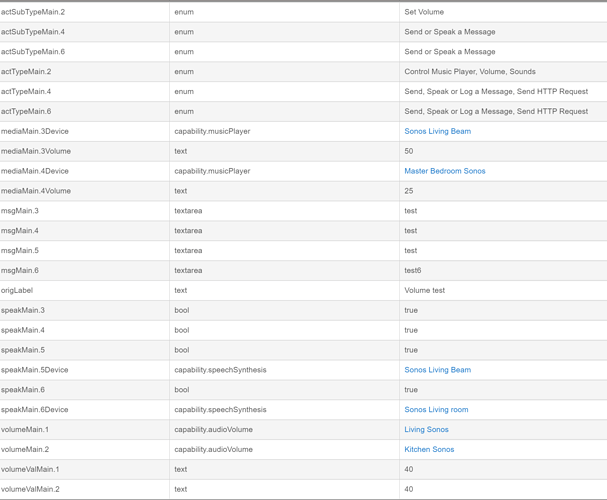 The .2, .4 and .6 objects refer to the existing actions, the other ones refer to actions that have been removed from the rule.

At the moment I'm working around this issue by creating brand new rules if I have to change the music device used. Is this something that could be looked at?

What happens depends on how you "remove" the music device. If you delete the action, then you haven't actually removed the device. To remove the device, edit the action where it is selected, and deselect it. This is the only way to actually remove a device from an app (not just RM). When an action is deleted, RM does not traverse the deleted action looking for device selections, so those selections remain, although no longer used. This will leave the "in use by" in the device for that rule.

To remove the device, edit the action where it is selected, and deselect it.

I didn’t realise that! Thanks for that advise! I must have been lucky with removing other actions then as I haven’t seen this before. Very good to know. Thanks again!

The next release will include a fix for RM where it will remove device settings when an action is deleted.

Love it! Thank you!

Edit: I will still heed your advice from post #2 though and exercise caution when removing devices from other apps.