BUG: RM places END-REP out of sequence, forced to CUT/PASTE

From these screenshots, I hope to make clear that a couple of unexpected behaviors in RM5 made it very difficult to complete a "Repeat Actions" block within existing Actions.
To wit, it was easy enough to introduce the "Repeat N times every HH:MM:SS" part, but clicking the offered "END-REP" button placed this necessary item way at the bottom of my Actions list (indicated with red arrow): 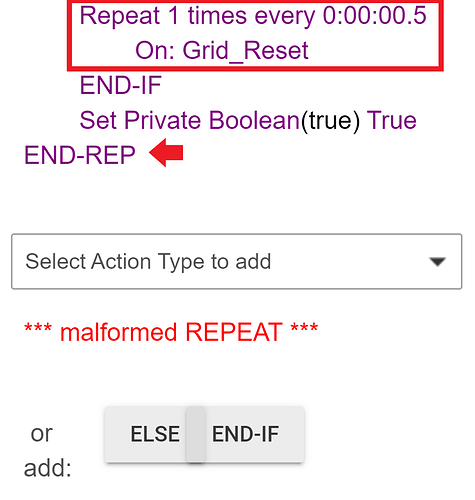 malformed_repeat1911×958 45.1 KB
That's an automatic fail for the Rule parser – note the "Malformed Repeat" warning – as it's located outside a containing IF clause, rather than right after the "Repeat" block.
Here's how it should look – an otherwise empty "REPEAT" block – which I managed only by doing a CUT on the "END-REP" item, and PASTE-ing it where needed (indicated with red arrow): 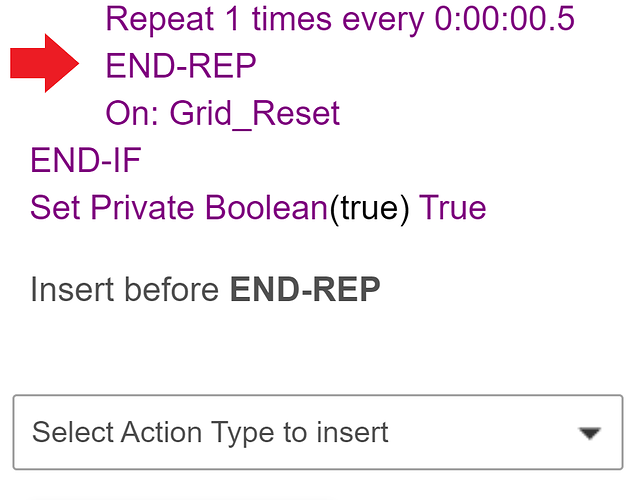 Confusingly, during this process, an unrelated pair of buttons (ELSE and END-IF) also appeared, ostensibly because RM thought I was suddenly working on the outer IF block. Note that these buttons overlap – at least in Chrome (latest) browser under Win10 Home – which I submit is a (layout/CSS) glitch in its own right.

NOTE: It bears mentioning that I rarely build Rules in the step-wise fashion it seems designed for...

Instead, I prefer to construct most Rules on a block-by-block basis...

then in-filling all the things later on. Yes, it's much harder to go this route in RM than most other rule engines, but I'm determined to adapt RM to my style rather than the other way around! I had hoped that the latest features in f/w rev .119 (CUT / COPY / PASTE) might ease the overall mouse-clicking burden, but alas, my workflow has only suffered while these kinks get worked out.