It it considered a bug in the Motion Lighting App, when motion is to turn on two lights and one is already on, that the other is not turned on, the complaint being "Not turning on, already on" even though only one of them was on? I do not have any other options set other than to delay off for 10 minutes. Works as expected if I only try to turn on one light. 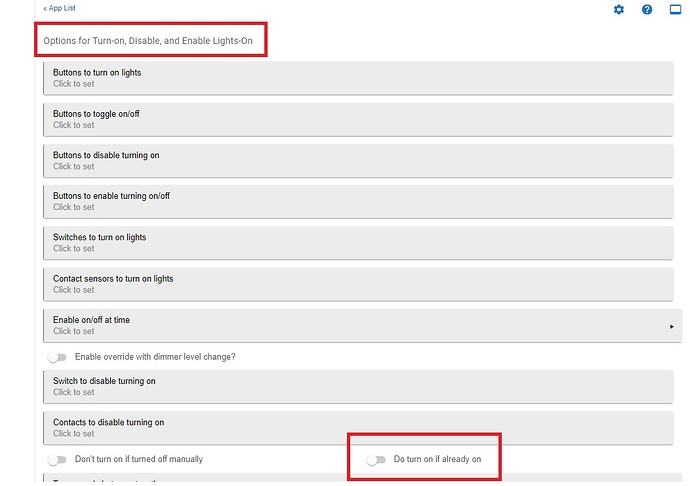 That looks like a different app, or at least a different version of the app, though I do have that option. I figured that option was to turn on an already on light, so as to trigger any events associated with turning it on, and not to continue turning lights on if one of them is already on. I'll try it tomorrow though and report back. Thx.

Shouldn't be, I created this just now for the screenshot. Don't know why yours would look different?

Same as mine...@dave7, to get to the screen shown, click on this on the main screen of Motion Lighting app. It's confusing, as the header on the screen above that you go to, doesn't match the name of the option on the app main screen (below).

Maybe the menu is context sensitive as my dialog with the same title has no mention of buttons or contact sensors, which I don't have any of in my system.

I'm curious now as to what yours looks like. Mine looks the same for both switches and dimmer types and even a color bulb. I even now just tried a few different options, and looked at both older and a freshly created app, and that is what mine looks like no matter what?

That is the one I click on but still have no mentions of buttons or contacts.

And just to confirm, you're in this app, right?

Ok I tried this, and setting that option does work and turns on the other light, but I have to ask if that is truly the intended function. Seems just because one light is one of multiple, the other should still be turned on, even without that option on, especially if there is a concept of turning on an already turned on light in order to trigger other events.

Yes, just guessing it is context sensitive in regards to buttons and contacts which I don't have.

If it works, go with it.

I hope that is why that option is there, for situations like this.

I am not sure, and only the app author could probably tell us, but if it sees "on" on either it might consider that the group is on.

buttons and contacts which I don't have.

You don't have any buttons or contacts? How can you be a home automation enthusiast without buttons and contacts?

Like seriously, you need to step up your game.

If it was my code, I would consider that a bug. Depends though as I said, if it makes any sense to turn on an already on light, in order to trigger other stuff, in which case that would fulfill a different purpose, Hopefully the author chimes in as to any subtlety of that option...

Will the HE staff see this or do I need to somehow ask them specifically? Thx

Using Echos and a couple sensors running zwave and zigbee stuff to meet my lighting needs, and already have a separate security system with contacts