Just wanted to say hello to everyone, and thank the Hubitat Community.

I'm about 3/4 through the migration from SmartThings to Hubitat, and all has been going well so far. This is in no small part due to the people here who spent the time documenting and explaining their own experiences migrating, so thank you for that!

So far I'm very impressed with Hubitat and I'm excited to finish migrating over, and see what else I can do.

So far I'm very impressed with Hubitat and I'm excited to finish migrating over, and see what else I can do.

welcome to the fun

Hopefully you will have more sense/restraint than I have (and maybe others in this community) to know when good enough is, well, good enough.

You have pinned the hubitat forums to your browser tabs

Just wanted to say hello to everyone, and thank the Hubitat Community.

Your timing couldn't be more perfect - in case you missed the announcement, there is another Hubitat Live! on YouTube tonight.

Join us for Hubitat Live, Tuesday, May 25. We're talking about our latest platform updates and Mike will be giving us a button controller breakdown during his Product of the Week. [Hubitat Live! 5/25/21 9pm EDT]

Hopefully you will have more sense/restraint than I have (and maybe others in this community) to know when good enough is, well, good enough.

You know you’re addicted to HE and home automation when

Not strictly Hubitat related, but I have an ESP8266 board that monitors the solar charger/battery level in my lawn tractor. I got to thinking that if I added a relay, I could have remote start on my lawn tractor. So yeah, that happened, for no reason other than to see if I could make it work.

Welcome! I too am from Smartthings

As am I.
I was never really happy with the cloud-first approach of the v1 hub they had (officially dead now as of the end of June). It was a gift from a friend, but it saved my a$$ two weeks after I put it up when my hot water thermal expansion tank sprung a pin-hole leak in the middle of the night. I won't go without some sort of automation now, and in fact I'm adding a water-main shut-off soon. Nearly overflowed my laundry tub a few times until I put a Zooz switch on my washer to kill it when the level sensor trips.

Despite the quirks and a few minor compatibility issues, the setup for Hubitat was WAAAAY faster than it was for ST, and I'm starting to settle into my new automation routines.

Now if only they could improve the WiFi/Ethernet static IP issues... (can't seem to connect both at the same time to the same OR different sub-nets).

How do you plan to implement? Based on a series of leak sensors?

I have an EcoNet Bulldog servo actuator (z-wave enabled) that sits over the ball valve that is my main water shut off in the crawl space (read: difficult as hell location to get to in an emergency). I can put leak sensors in the drip pan for my water heater (already have one), behind the fridge where the ice maker connects, under the sinks, under the dishwasher, and maybe under the clothes washer as it discharges into the laundry tub (I already have a plug for the washer that stops it if the tub gets too full, so this would be more like for a line blowing out or the machine itself leaking).

[NOT A SPONSOR, I paid for my unit out of pocket] https://www.amazon.com/gp/product/B07DJZCFBH This ships in from Canada, and you'll get an email from them asking about your valve and setup before it ships so that you get the right one, both in regards to connectivity, and the valve size you're working with, from 1/2" up to 1-1/2". Connectivity is either WiFi or ZWave, or even relay-contacted for older or manual systems. You have to pick one of those 3, but there is a clutch mechanism and a handle on the top to crank over the valve in an emergency. It takes 12VDC, 700ma during cycling, 60ma standby, so it can be run from an SLA or lithium pack during power outages. The control box that has the antenna on it (if you go that route) has the receiver, the 12V input, and a cycle button to "manually" operate the valve and pair it to the system. That box connects to the valve actuator assembly via a 6pin mini-din connector (AKA a PS/2 port from back in the day), which can be extended (M-to-F) about 50' (I got conflicting information from the rep, but I'm only going 25' into the crawl space, so should be fine).

Oh, and if I need to shut it off in a hurry without logging into my hub or navigating those ridiculous dashboards, I have a z-wave wall switch (one of the stick on ones, battery operated) programmed to send open and close commands to it.

I've attached contact sensors to my Bulldog so have an independent way of verifying the valve is open/closed. I have the valve close and open on the first of each month to make sure everything is working properly and the valve remains loose.

Color me intrigued. How did you mount the sensors/switches?

Now if only they could improve the WiFi/Ethernet static IP issues... (can't seem to connect both at the same time to the same OR different sub-nets).

You can't. It's either hard wired or wifi, not both. You're better off maybe doing a vlan. While you can set a static ip within the unit itself, it's better to use a DHCP reservation for it. Makes it easier to adjust things from a central location....

Sorry for the slow response - was out for a bit.. I kinda rigged it but here you go! 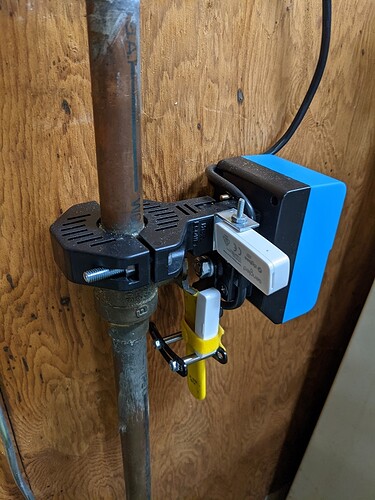 edit: am using a Sengled Zigbee Smart Window & Door Sensor I had on hand.

The two big reasons I'm much happier with HE than I was with ST are the better mobile app device presence detection and the lower latency due to local processing. Presence detection isn't perfect with Hubitat either, but with ST's new app mine is atrocious. So bad that I wouldn't be able to us it for any routines. As for local processing, I don't really care about controlling things when the internet is down; mine is reliable, and if it's down it probably means a power outage so devices won't do anything anyway. But the latency advantage of local processing is huge for me. For example I have a button I press when I go to bed upstairs, and it shuts off all the downstairs and garage lights and locks the doors. With ST I would hit the button, and the 2-3 second delay before I could see lights shutting off seemed like an eternity. With HE there is still a delay, but it's usually less than a second... I don't have to stand there wondering if it worked.