I've been looking for something but didn't know what and then I saw an ad for Habitat being unsatisfied with Vera and everything else. I just got the Zooz and added them to newly brought up Hubitat.

Eager to dump Vera and move all the sensors over. I may be premature but so far all i can say is.. OMG what a breathe of goodness compare to what's going on in the world right now.

Here waiting for YOU, silly!

You just found and even better part of HE, this community!

Welcome, and if you hit a bumpy patch let us know, lots of folks here to help.

Welcome aboard. I switched from Wink to HE and haven't looked back since (well just occasionally since I still have to sell my old Wink Hub). The speed and amount of things I can do with the HE is great. Just be careful on putting too much as it can impact the speed of the hub, and result in you needing another

Well...most excitement still intact however, reality is sitting in. Looks like the Zooz's 4:1 sensor although motion looks to work, the temperature isn't updating? weird. will follow up once I find whats up. However, still excited about the prospect though

PS> Using dashboard, looks like the column/row thingy doesn't work? Can't reduce or increase column/row or I have no clue? Only have 4 of the same temperature sensors and on mobile wanted to make it all fit in one screen by making it 2x2 but the column still expands out to 5+ columns when I specified only 2.

The sensor only sends an updated temp/humidity reading if it passes a certain threshold. You can change the threshold.

Thanks. will look into the threshold, didn't realize. I blindly thought it would magically update as temp changes, but then the battery would like like only few days.

Also my bad on dashboard, I didn't know how to use the tiles, but after little tweaking, totally stoked on how things could look in the end! Can't wait. 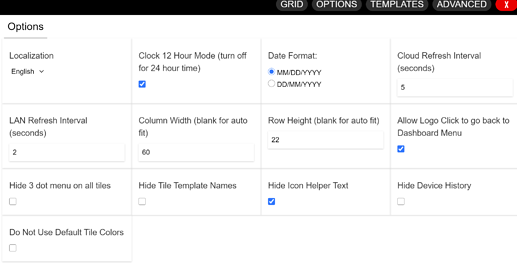 The Show Off Your Dashboard thread is cool too.

Thanks TechMedX! will do! also my bad, I was illiterate on howto tile things.

PS> I've been doing IoT / home automation for awhile as 5min a day hobby. newborn taking up the other 23hrs and 55mins

Although I mentioned I'm a newbie, I do code and have played with home made ESP8266-xx devices including thought to disburse an army of Sonoff's temp sensors w/ Tasmota. Having a multi-story house and now with a baby, knowing what the temps are in each room and certain areas has become paramount thus my blind pursuit of anything realtime temperature sensing.

Just fyi. where I'm coming from and headed.

PPPS> is there a forum section where one lists what everyone has and look to compare notes instead of wading through hundreds of posts?

Ha! DuckDuckGo and I shall recv:

I would recommend trying

Even if it is has been asked we will either point you to it, or post again for the next person who searches.

Thanks. So much to try with this new shiny shiny!